What is a city?

What is a city? Or rather, how do we experience a city as a spatial object? One might consider a city a combination of two interrelated and interdependent systems: one made up of buildings, the other of spaces left open. With his project in the city of Utrecht Egied Simons has attempted to express this perception of the urban area.

Starting from an area round a bend in the Oude Gracht in the old city center he developed a "photographic registration" and a design for a monumental spatial intervention. The photographs, taken upwards from eighteen street corners and crossings, show the façade endings of the corner houses situated at these points. On the basis of these photographs, which are displayed on a white wall and arranged according to the city structure they represent, it is possible to reconstruct a plan of the area. A number of lines which can be identified as streets, and street names as well, can be helpful to this end. They should, however, be of minor help because to convert the collage into a city map would mean an unacceptable reduction of the spatial effect achieved by this registration.

The design for the spatial intervention depicts a steel construction which lifts the plan of the area to a height of 35 meters. Like the photographic registration it betrays Simons' critical attitude to the inability of the plan to provide a spatial representation of the street. The plan and the cityscape are two unequal quantities. A person walking in the street cannot acquire the kind of overview the plan offers. Only an aerial photograph can approximate this. One's view is confined by one's range of vision and the dimensions of the buildings. Yet, we are aware of the existence of the plan - we know that the city extends beyond the place we happen to be at a particular moment, and the way we experience our being there. Only if the plan is lifted high up in the air it will become incorporated into the urban area as it is experienced.

This awareness of the fact that we only experience part of reality appears to be one of the basic themes in Simons' works. As early as 1985, when he graduated from the Rotterdam Art Academy, he asked himself in a statement how phenomena that have become barely noticeable due to habitation can be revealed: "Which reflexes deprive me of discernment?" He claims here that our experiences are limited because of the conditioned way we perceive reality. In addition, the physical area that determines our experiences is restricted. This opinion of Simons is clearly expressed in the following quotation from the same statement: "Spaces are determined by boundaries. How can I turn the walls transparent?"

An example of the way Simons deals with this problem is the performance of a lift with video installation he contrived in 1987. Video cameras have been placed at the top and at the bottom of a lift cage: one is directed straight down, the other straight up. The video cameras bring the lift shaft into vision. In the cage these images are presented on two monitors fixed at eye level. Only then the area of the shaft and the movements in it, the user of the lift senses, but never actually sees, are made evident. This installation is related to a project at the Wijnhaven in Rotterdam, as both show movements, and, consequently, time. Simons constructed a grid of burning fluorescent lamps (ca. 210 cm long), which he attached at low tide level to fixed spots in the water, in such a way that they could move easily. They react to the stream and are raised slowly at high tide until they reach an upright position when the tide is turning. In this project attention is thus focused on a process most citizens are unaware of. The direction of the current and the water level can, even on a photograph, be read off the position of the lamps.

In retrospect, the presentation of the Wijnhaven design proves to be interesting as well. Photomontages of three phases of the process, which are never observed simultaneously, are here displayed side by side. In the Utrecht photographic registration this collage of separate observations which in fact can only be viewed in sequence, never in a survey, is of primordial importance. A substantial difference, however, remains the fact that the Utrecht project depicts synchronous situations that are only temporarily restricted in the mind of an acting person. Whereas each of the photographs of the Wijnhaven project is an independent illustration of the registering nature of the lamps, those in Utrecht form a unity based on the structure of the city. As each street is photographed at both ends, the photographs ask for each other: they are counterparts.

Still, here the time factor is not entirely absent either. The short focal distance of the objectives used would imply that major part of the layer of clouds would appear the same on each photograph. Id est: had they been taken at the same time. The difference in skies thus indicates an interval of time. As the arrangement of the photographs on the wall is determined by the structure of the city, so the shapes of the skies in the pictures are determined by the frames of the pictures and the buildings at the crossings.

This method of working, taking as a starting point a logically applicated method of registration - Simons calls it "objective measuring" - to arrive at shapes and compositions dictated by existing situations, appears from a large number of his works. He took, for instance, photographs of shapes that come into being when a particular area is temporarily enclosed by shadows. More recently, Simons created compositions dictated by the floor plans of private houses. With a fixed shutter speed he photographed the various ceilings of rooms, so that the amount of light entering the rooms decided how light or dark the surfaces concerned would appear in the compositions, and how the transition from light to dark would be within the different surveys. Similarly, the steel construction in Utrecht is framed according to the structure of the area it marks. To come back to the question how we experience a city, one might state, after having gained a comprehensive view of Simons' works, that the perception of the city is the method of its registration. 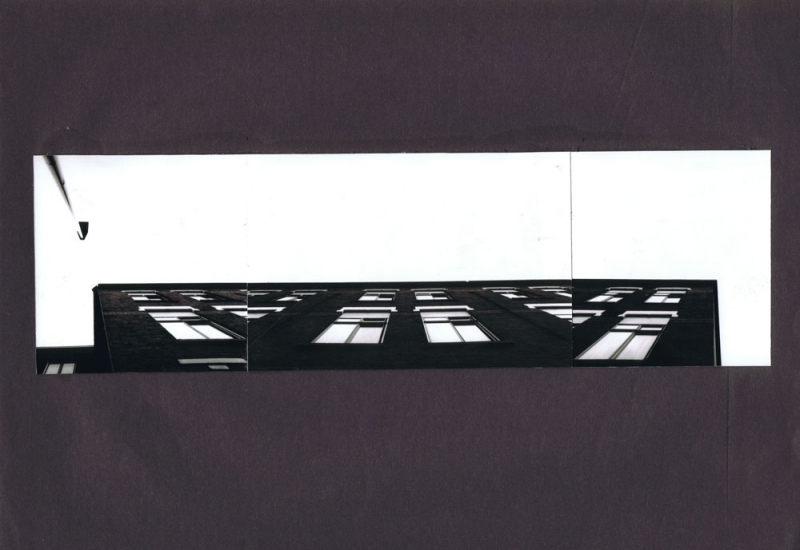 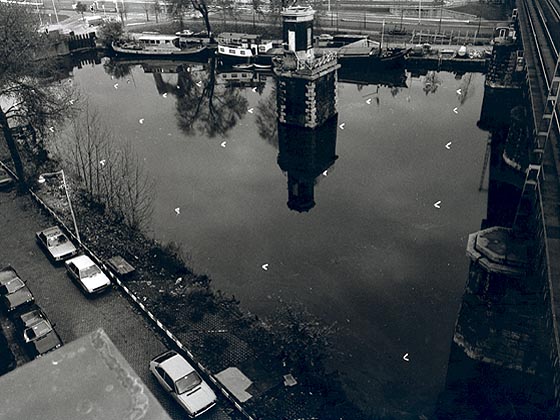 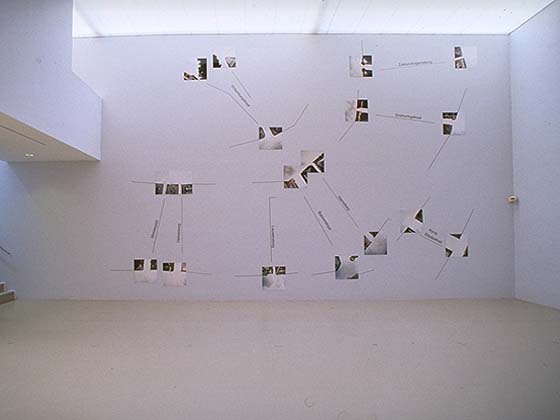 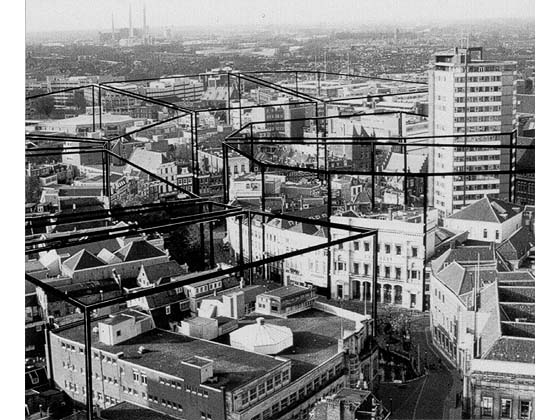