Egied Simons has turned the tables. In answer to a commission to design an 'artwork in a public space' he has responded with a plan in which the public space is not primarily conceived as the artist's working area, but the domain of anonymous public and invisible authorities. It is they who determine the boundaries by behaviour and gesture, by usage and activity, by directive and regulation, by order and interdiction. The space is defined by the comings and goings of those who use it and the limitations placed on what is, and what is not, permitted, rather than the actual lay-out or any particular architectural or sculptural interventions. What is permitted, what will be tolerated, and where are the boundaries of the illegality? In this context, Egied Simons' contribution to The Campaign has a conceptual significance which is independent of its possible realization. And the fact that his proposal was not finally implemented in no way diminishes its content.
Simons' suggestion was to create a temporary area for the sale of private second-hand cars along Boekweitkamp in Mariahoeve. He wanted to establish this sales outlet on a hundred-and-fifty metre long lay-by beside the road and to indicate it by painting the road surface blue, playing pleasant background music, and by placing slatted signs with information about the project and announcements of possible sponsors. The nearby Cafe Lucia would serve as a meeting place and sales area. The public could be kept informed about Simons' project through the local newspapers and circulars.
Egied Simons' scheme for a temporary sales outlet reveals something about the way public places function and the use to which they are put. The number of cars that are now anonymously offered for sale through notices placed on windscreens stating price and telephone number, produces speculative connections between public and private places. Many people consider the parking place in front of their house as private property. By temporarily concentrating the car trade in the no-man's-land at Boekweitkamp, Simons also gives it its own demarcated area and he establishes a situation similar to that at the Mariahoeve shopping centre. There, too, colour and music are used to create an atmosphere intended to appeal to people individually, but where, in fact, the public place remains meticulously anonymous yet accessible in a subtle and controlled way.
Direct governmental interference in this public area prevented Simon's plan from being realized - which means that only the concept and the model can be exhibited. Police regulations do not permit the sale of cars beside a public thoroughfare, local plans for a reconstruction of this particular road prevent other forms of use, traffic safety would be called into question if drivers' attention were distracted by an artwork with colour and music, and the sale of second-hand cars might encourage a rise in crime. The boundaries of public spaces are inextricably bound up with the rules governing public behaviour. 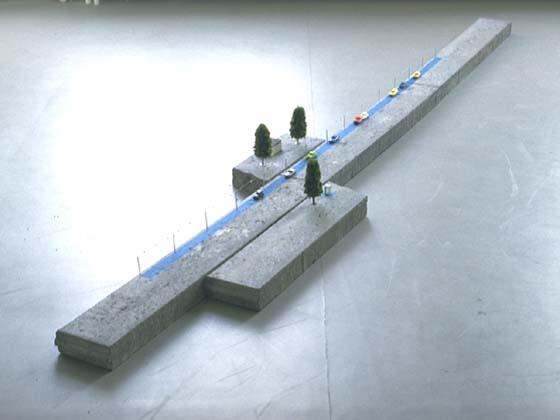