During the workshop 'Optitheek Live, fictional city' which is to take place in the Visual Arts Centre in Rotterdam from 10 to 29 September, artists, architects and writers will be drawing their inspiration from the 'Optitheek', a data bank at the Rotterdam Public Works department in which 90,000 panoramic photos and 1,800 aerial photos of the city are stored. The participants in the workshop will react in their own artistic way to this virtual version of Rotterdam. The results will be on view in the Visual Arts Centre, Rotterdam, during the R96 Festival 'De Nieuwe Verleiding' (The New Temptation) from Saturday 21 to Sunday 29 September. The Optitheek at the Public Works department in Rotterdam has many tens of thousands of digital aerial and panoramic photos of the city. The panoramic photos were made using a special camera with a fisheye lens, mounted on the roof of an Austin Morris Mini. The camera produces 360 degree photos which are later remoulded by the computer. During the 'Optitheek Live, fictional city' workshop, the architects, visual artists and writers will link up with the data bank from the Visual Arts Centre, via an ISDN line or take the road themselves with the Mini. They will provide the images in the Optitheek with commentary and may introduce additions and changes. Participants in 'Optitheek Live, fictional city' are: Egied Simons, Daniel van der Velden, Frank de Bruijn, Geert Mul (artists) and Herman Verkerk (architect). The editors of this project are: Maarten Sprenger, Jouke Kleerebezem, Q.S. Serafijn and Albert Wulffers. The ideas to be fleshed out during the workshop can de described briefly as follows: Frank de Bruijn will construct a 'street map' of the complete sky above Rotterdam, using the sky areas from the panoramic photos which are usually cut away and not used. This sky inventory will be on view on a wall panel in the Visual Arts Centre and possibly in the form of a map. Herman Verkerk plans to make a stage-managed panoramic photo of the Breitnerstraat in Rotterdam, whereby he makes reference to the work of the painter and photographer Breitner. In this way he will draw attention to developments in the representation of reality. In a special installation in the Visual Arts Centre he will combine the panoramic photos with Breitner's work and propagandistic street scenes of Soviet cities, whereby a 'cardboard' shadow will emerge. Daniel van der Velden will have photos from the 'Optitheek' printed on flyers, with meaningless fragments from today's society (packaging, video images, lost property, numbers, letters) on the back. When the flyers are distributed around the city the images from the Optitheek will function as 'lost property', so that Van der Velden can offset them against the closed and functional character of the Optitheek which is, in fact, geared towards official use. Egied Simons will himself go into the city with the Morris Mini and a video camera to provide supplementary material for the Optitheek. He will be on the lookout for anything he feels is lacking there. Whilst the Optitheek is primarily geared towards recording objects, Simons will concentrate on processes. He will, for example, get into a traffic jam where the camera will provide a view of his fellow road-users, he will study the division of the city into public and private areas and make the city's threatening, invisible past visible by driving to 50 spots where shells landed in the Second World War. The images will be presented in the Optitheek system in the Visual Arts Centre. Geert Mul will compensate for the lack of sound in the Optitheek by providing the images with commentary in the form of subtitles. These may consist of monologues, dialogues and triologues. As with the teletext subtitles for the deaf and hard of hearing, his subtitles will provide descriptions of the surrounding noises, the different speakers will have their own colour and symbols will indicate the intonation of the spoken sentences. In this way, Mul seeks to link the cool, mathematical aesthetics of the Optitheek with the aesthetics of real life which cannot be encapsulated in a system and can be confusing, dramatic, tiresome, superficial, meaningful, loving, loveless and, most of all, unpredictable. Lecture and dialogue At 3 p.m. on Saturday 21 September there will be a dialogue between John Oud (Optitheek Municipal Works Rotterdam) and Albert Wulffers (film-maker and one of the editors of this project). At 3 p.m. on Saturday 28 September John Körmeling (artist) will give a lecture in the Visual Arts Centre in connection with 'Optitheek Live'. Delocations During the R96 Festival 'De Nieuwe Verleiding' the Visual Arts Centre will be organizing 'Optitheek Live, fictional city' and 'Digital history'. These are the first parts of the project 'Delocations, on the place of the word in the image' which will last until June 1997. In the context of 'Delocations', work groups consisting of artists, theoreticians, writers and architects will go in search of relationships between cultural manifestations of 'word', 'image' and 'place'. They will hereby intensify the current debate on the relationship between word and images and look into the influence of the new technology and media on the place of the word in the image. Coordinator of Delocations is Cornee Jacobs. 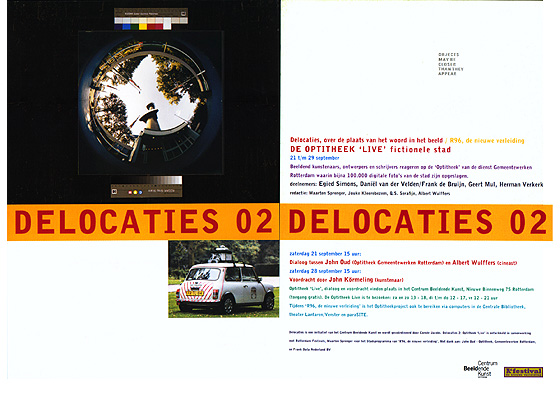 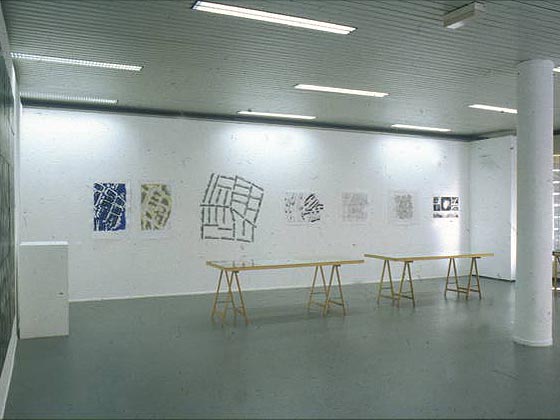